So, it's been fifteen years since I married this guy. That seems at the same time, very reasonable and completely implausible. Time is a slippery beast, and I swear it feels like only a few days ago that we skipped down the stairs together at Duke Gardens. At the same time, they've been some very full years, and sometimes I can't believe it's only been fifteen years.

We got married in the middle of May, at a ceremony we invited fewer than twenty people to. The day was overcast and intermittently rainy, which could have been bad news for an outdoor event involving a white dress, but we were lucky and the sun came right right when we needed it to, bathing us in gorgeous light and keeping our friends and family dry.
We've always been proof that timing is everything.
When I met Sweetman, I was already engaged to someone else. He says he had an unrequited crush on me in the intervening years, but I suspect him of flattery and revisionist memory. What we did have though, was an ongoing friendship, the kind where we always made a point of seeing one another whenever we were in the same town. Over those years, I married and had a child and he dated, but had never settled down.
Twelve years later, I got divorced, probably about four years later than I should have . . .we hadn't been right together in quite some time. I sent out that big group email like you do, letting anyone who might care know about the changes and where I would be living and all that *fun* (sarcasm) stuff. Sweetman was one of the friends I told.
As luck would have it, he was also free. Timing is everything.
I worried that I was going to ruin a friendship by jumping into a romance too soon. I didn't want my good friend to become my rebound guy.  He worried that he was taking advantage of me in an emotionally fragile moment. In the end, it worked out, and we still worry about each other to this day, but now we have a little more power to do something about it.

So Happy Anniversary to me and Sweetman. We celebrated by taking a garden tour and having Thai for lunch, since our first official date included Thai food and flowers. I wore my Bride sneakers, the ones I commissioned for our wedding. He wore a pale blue Havana style shirt and a Panama hat, because he know I love how he looks in them. 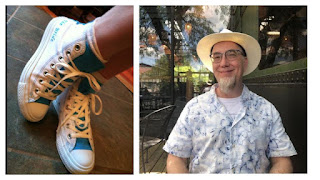 So, there we are fifteen years into this marriage. If the next fifteen go as fast, I'll be back tomorrow to tell you how dapper he looks with that new walking stick.
Posted by Samantha Bryant at 5:13 PM