I started November on deadline, so I wasn't reading much. But once I submitted my novel to my critique group, I found a little breathing room and picked up a few reads. I finished four books this month, and two of them were long. I started two others, that I'm not sure I'll finish in the next few days…so I'll write about them next month.
First was Black Sun by Rebecca Roanhorse. I've read two other books by Roanhorse: Trail of Lightning and Storm of Locusts, books and 2 of her The Sixth World series. I LOVED both of those, so when I saw she had a new release at the same time that I got my monthly Audible credit, I was on that sucker.

Black Sun is not much like the Sixth World books, but that didn't matter after a few pages. I loved it.  An epic fantasy story pulling from Native cultures for its lore, with fascinating characters, and an interesting world. Even though I'm not generally one for "court intrigue" kinds of stories, this one attached all the plotting and machination to huge emotional stakes, and I was riveted.
Robinson Crusoe was the selection of my First Monday Classics Book Club through my library, a group I help facilitate with James Maxey, another local writer and friend. It's one of those books that I feel I ought to know, but had never actually read. I knew the broad strokes of the heavily-referenced book and had gathered that it was steeped in British imperialist racism, so I had some clue what I was in for. I went back and forth between an audiobook and a kindle edition for this one.
I actually found less cringe-inducing racism than I expected . . .maybe because the character spends three-quarters of the books alone. Friday doesn't enter on the scene until about that point. Until then, the book is a quiet exploration of what it might take to survive and a bit of reflection on the meaning of life. I'm still not sure how much I'd recommend it. I found the last quarter-to-third of the book frustrating since as soon as the narrator reconnected with broader society, he seems to have forgotten every "lesson" he learned on the beach and become the same shallow, self-serving idiot who got himself into that mess in the first place.
Reading the book did put me an adventurous mood though, and I picked up King Solomon's Mines next, a pulpy story, largely considered to be the first "lost world" story. One thing that always fascinates me about reading older books is the secondary story--the story of the author and the era in which they are writing. Racial and societal attitudes permeate the pages, revealing the common beliefs of the time in a way that even nonfiction does not capture the same way.
H. Rider Haggard, I learned, spent a great deal of time in Africa, and it showed in his depictions of the lands and peoples. Three African characters featured among the main cast, and they were more than just a collection of stereotypes and assumptions. Allan Quartermain, our narrator and main character, was a more nuanced character than I'm accustomed to in pulp as well. I'll probably go on and read more of this series.
I started Allie Brosh's Solutions and Other Problems a few weeks ago, then set it aside, then picked it back up. I was reading it on kindle, which is not ideal for a book featuring so much art, requiring "pinch and zoom" to view some parts. But I don't buy books in print as much as I used to--I'm running out of house to store the books in! 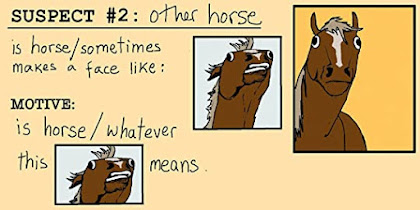 It was a strange sort of book. Part self-help, part memoir, part comedy essay. And also kind of a graphic  novel. I alternately laughed, sighed in recognition, and squirmed in discomfort from chapter to chapter, but I walked away feeling soothed and seen (in a good way), so I'll probably read more by Brosh, too.
Overall, not a bad reading month. I read four books, loved one of them, and like three. 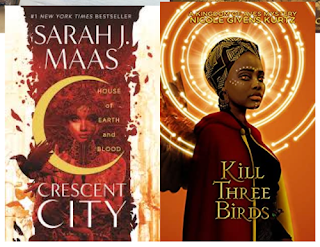 As the month comes to a close, I'm in the middle of two more books.  Sarah J. Maas's House of Earth and Blood: Crescent City is an urban fantasy book I've been hearing quite a bit of buzz about. I spent an Audible credit to pick it up some time ago, but hadn't yet read it. I'm 12 hours into a 27 hour listen and am finding it hard to put down now, though I wasn't sure it was going to grab me at the beginning. I'll let you know next month what I think.
Kill Three Birds is part of a new series from Nicole Givens Kurtz, a friend and colleague. I started reading it when it was newly released (a couple of months ago), but set it aside to meet that my writing deadline. It's a creative fantasy world where the people are birds, at least spiritually, connecting to different aspects of avian creatures. Coming from Nicole, I'm not surprised that it's also a mystery and a bit of a thriller, because those are her playgrounds.  I suspect I'm going to love this one.
How about you? What did you read in November? Anything you think I'd love? There's always room in my TBR…though at this point, I'm going to need to find an elixir of immortality to have time to read it all. :-)

Posted by Samantha Bryant at 6:22 PM