Writing Short Stories, or the Joys of Anthologies

I've had sort of an odd trajectory in my writing life, having started as a poet, and jumped from there to  novel-writing. Maybe it would have made more sense to start with shorter fiction, but that's not what happened for me. I didn't really start writing short fiction until after my first novel was accepted for publication.

Short fiction is like novel writing…and it's completely different. Structurally, a novel and a story need similar elements, but they use them in different proportions and levels of complexity. Some novelists are able to write short stories easily, and others struggle with the shorter form.

For a long time, when I sat down to write something, I'd have no idea how big it was going to be until the project was well underway.

I've started novels that turned out not to have enough to them to fulfill that form, so they became novellas or short stories. More often, I've tried to write a short story only to have the story grow and grow and grow, until I have another novel on my hands (or *another* series-length idea: sometimes I just want the idea to stay small!).

I'm getting better at gauging the length I'll need to do a story justice these days. It happens less often that I'm surprised by the length the work ends up being. Experience is useful in that way.

Here's the thing: novels take a long time to write.

Generally, I need between six months and a year to write a novel of 85K or so (the length most of my novels seem to come out at, at least so far). The longest I've spent on a novel was four years, but it was also my first one, so it makes sense it would take longer.

Short stories, on the other hand, can sometimes be drafted in a single writing session. And that feeling

of FINISHING is such a rush! I can see how a person could become addicted to short stories just for the feeling of having finished a complete piece of writing in a relatively short timespan.

Making a living from short story writing is even more challenging than from novels though. You can sell them to magazines or to anthologies mostly, and the pay ranges from "exposure" to lovely by-the-word prices.

Anthologies probably help your career more if you also have some longer works to sell, allowing you to attract new readers with that short work and guide them to your longer work.

What I love about writing for anthologies is the opportunity to experiment with something new on the page without the large-scale commitment represented by a novel.

This is my fifth year as a professional writer, a moniker I started applying to myself when my first novel was published in 2015. In that time, I've had work included in sixteen anthologies. So, yeah, I might like this :-) 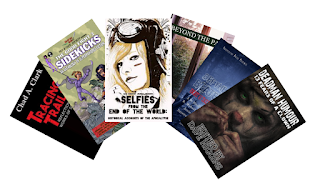 I've got at least two more anthology stories coming out this year, and two more on the horizon with not-yet-set release dates. Check out these books coming out in October! (and click on the covers to visit the pre-order links, while you're at it--authors need love…and reviews!). 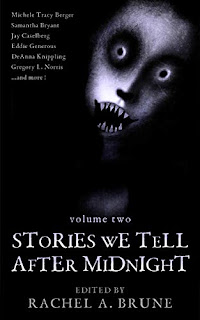 As a deadly scourge overwhelms the continent, four survivors race to find a last exit out of Australia.Up in the attic, a bedtime story outlives its storyteller.A city boy visits his country cousins and stumbles on a terrifying family secret.From a film set in the Arizona desert, to an overgrown rambling old house in the Florida swamps, to the dusty streets of a small Mexican town, the stories in this volume plunge the reader into the shadows of a world almost forgotten by modern fables of cold science and bright sunlight. They are the brushed over voices who call a warning to those who would comfort themselves in the thought that monsters aren’t real, and those things can’t happen here. Stories We Tell After Midnight Volume 2 offers up tales of revenge, of hunger, and of the horror that stalks you just beyond the glow of your cell phone light, but only to those who dare turn the page…
Coming October 13: 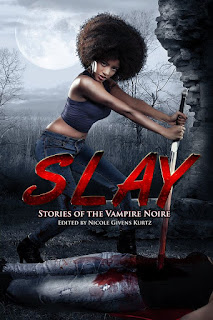 Mocha Memoirs Press is proud to present SLAY: Stories of the Vampire Noire — a revolutionary anthology celebrating vampires of the African Diaspora. SLAY is a groundbreaking unique collection and will be a must-have for vampire lovers all over the world. SLAY aims to be the first anthology of its kind. Few creatures in contemporary horror are as compelling as the vampire, who manages to captivate us in a simultaneous state of fear and desire. Drawing from a variety of cultural and mythological backgrounds, SLAY dares to imagine a world of horror and wonder where Black protagonists take center stage — as vampires, as hunters, as heroes. From immortal African deities to resistance fighters; matriarchal vampire broods to monster hunting fathers; coming of age stories to end of life stories, SLAY is a groundbreaking Afrocentric vampire anthology celebrating the rich cultural heritage of the African Diaspora.
Posted by Samantha Bryant at 8:04 PM