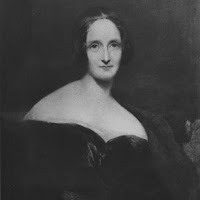 When eighteen year old Mary Shelley had a bad dream that turned into a book, she couldn't have imagined the cultural phenomenon that would emerge from her pages. She created an entire genre: science fiction. The ripples that she started are still spinning out two hundred years later.

Frankenstein is one of those stories that everyone just *knows*, even if they've never read it. It's been adapted in hundreds of way, re-imagined, used in homage, served as inspiration for so many pieces of art of one kind or another. Clearly, we're not done with this story yet.

My first introduction to the story probably came through the celebration of Halloween and all the masks and television specials featuring some version of the monster. The version of the monster enacted by Boris Karloff was already imprinted on the world well before I was born: square head, visible black stitching, metal bolts on the neck, greenish flesh, stiff walk and all. I can't remember when I didn't know that iconic image.

I eventually saw all the old movie versions on cable television: Karloff's, Chaney's, Lugosi's, Lee's. I drank in Young Frankenstein and the monster's romp with Abbott and Costello. I loved Lurch, Herman Munster, and all the cartoon versions of the monster from Scooby Doo to the Groovieee Goolies. The monster has been played for horror, for pathos, and for laughs, and he's effective in all those roles. If a story is riffing on Frankenstein in some way, I'm sure to give it a try.

I was in college before I read the original book, and like many a reader, I was astonished at the difference between the monster Mary Shelley wrote and the one we know from popular culture. The more sensitive and articulate creature has been making a resurgence. I recently watched the Penny Dreadful television series and The Frankenstein Chronicles, both of which give the monster voice.

I've read it a couple of times since.

I'm still not sure what it is about this storyline that draws me in so. Is it the mad science elements? The abandonment pathos? The misunderstood nature of the creature itself? Maybe it's something deeper, something I feel at a more symbolic level, something about motherhood or the nature of creation or the boundary between life and death.

Any other fans out there? What's your favorite version of the story?
Posted by Samantha Bryant at 6:00 AM