Life can be such a horror show sometimes. People are jack-holes or just thoughtlessly, selfishly cruel. Systems fail us.

You would think that would make horror fiction unappealing, but at least for me it only adds to the appeal. Especially at this time of year when I'm in a long stretch of no breaks in the school schedule, honeymoon period ending, I'm ready to escape.

I want excitement in my story, but not any real-life trauma or drama. Even though these stories are tense to read or watch, they are relaxing in that I don't really believe they are true. So, I look to horror at this time of year in my reading and movies. This year, I'm giving it a go in my writing as well.

I'm playing along with a friend's challenge to write a piece of flash fiction every day in October. She calls it Nightmare Fuel, and provides a creepy/spooky picture every day. You can follow the collection of prompts here and you can look at what I've been up to here.

Here are some of the images I've been writing from. 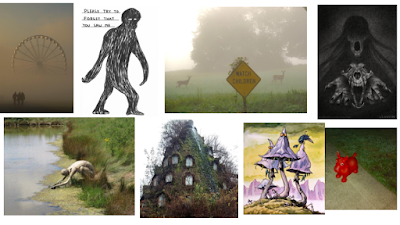 It's led to quite a range of spooky things: creatures hidden in fog, invading aliens, transformations, inanimate objects moving, tortured spirits. I'm really having a great time remembering the playful side of writing for a while before I get back on track for NaNoWriMo.

Here's one to chill your Wednesday. It goes with the picture above of the muddy person leaving into the water:

I thought it had to be a statue. Though I couldn’t imagine why anyone would go to the trouble to place a sculpture out here. This little lake was hardly a tourist attraction and the path so little traveled that I had to beat down weeds in places to get through.
But still, the figure by the water had to be some creation, a fake thing. It was so still you see.

No rising and falling of the chest. No sound.

It squatted there at the water’s edge in a position that made my hips hurt just to consider. It’s impossibly skinny arms stretched too long in front of a rounded back that also seemed elongated and out of the expected proportions. Its attention remained focused on the space between its elbows.

I stopped. My hand crept to the gun at my side. I couldn’t have said why, but when my hand drifted that direction, I tended to let it. I think my subconscious has some secret pathway that goes straight to my trigger finger without involving my brain along the way. I don’t resist it. It’s saved my bacon more than once.

Nor did I call out. Idle curiosity trapped more than one fool. If there was a choice between knowing and living, I knew which I’d choose. What was the old saw? Ignorance is bliss? Sometimes it really is.

I took a step backwards, feeling too exposed where I stood. When I snapped a twig with my boot, I thought I was toast, but when I looked back at the muddy bank, the figure had not moved.

It had, however, changed.

The arms and head seemed to be fusing together, forming an elongated triangle. The process was slow, molasses slow, but a change was definitely happening. The human-looking pieces, the head,arms, legs, and torso all melted into one another, bit by bit, until the creature stretched long and flat, with a dangerous and toothy snout aimed out at the water.

The eyes didn’t open until the bumps began to rise on its back. Crocodile. There had been stories, tales I’d heard all my life, of the crocodile people who populated the swampy backwoods areas. I never thought I’d see one.

The yellow eyes blinked. First one and then the other. Like a wink. Then the creature smiled. The long mouth flexible, turning up in a weird, toothy parody of the human expression.

I tipped my hat. Courtesy never hurt. A little respect could keep a body whole. It was worth a shot.

Both eyes closed and the crocodile-man pushed into the water. I watched for a long minute before I lost track of him in the muddy waters. I turned back and picked up my pace, hoping the transformation back to land-form took as long. I might could make it to shelter before he hunted me down, if I hurried.