An Interview with Damian Trasler 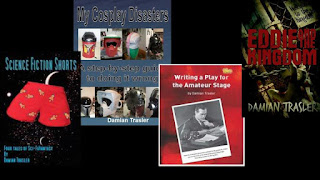 Looking back over my e-book sales for the past year, one thing has suddenly become clear : I have made more money from taking my beer bottles for recycling than I have from selling e-books. This caused two further realisations.

One: I’m not very good at self-promotion.

Shouldn’t you be telling us how great your e-books are?

Oh, yeah. They really are. Almost everyone who reads them really likes them.

Do they leave reviews saying that?

Well, yeah, some do. That’s how I know. A couple of people have said they didn’t like them, but their reasons were totally justified and I’m good with that.

That’s the question, isn’t it? And the honest answer is, I don’t know. I have three non-fiction books, for example. If you want to know some useful tips for writing for Community Theatre, then yes, I have the book for you – I’ve been a published playwright for nearly seventeen years. If you’re interested in how my family and I fared emigrating to Canada, then you’ll like “The Great Canadian Adventure”. It has pictures, and funny stories and real life examples of stuff you need to know when you emigrate to British Columbia. And we’re still here, so we didn’t get too much badly wrong, right? And hey, I’ve written the definitive step-by-step manual to building really bad Star Wars costume helmets…

I don’t think I need any of those. And I’ve just remembered I have to be somewhere else….

I have fiction too.

Well… Some is science fiction. Some is horror/thriller. Some is just short, dark fiction, and there are a couple of collections of coffee-break stories. There’s a small book of poetry. Oh, and I’ve written a YA novella too.

Quite.The quickest way to check out the books I’ve written is to visit my Amazon Author page, where they’re all neatly lined up for you to see: http://www.amazon.com/Damian-Trasler/e/B007XI3A3Q


Damian Trasler is a playwright who dabbles in e-books. His plays are published by Lazy Bee Scripts 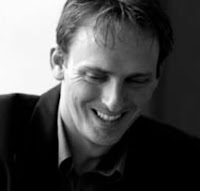 and are regularly performed across the world. He currently lives in British Columbia with his family and is very proud of the fact he once appeared on TV in the Ruth Rendell Mysteries (although it was in the last five minutes of the show and he was only on screen for ten seconds) He has not been asked to write a screenplay for any of the upcoming Star Wars movies.
Posted by Samantha Bryant at 6:00 AM