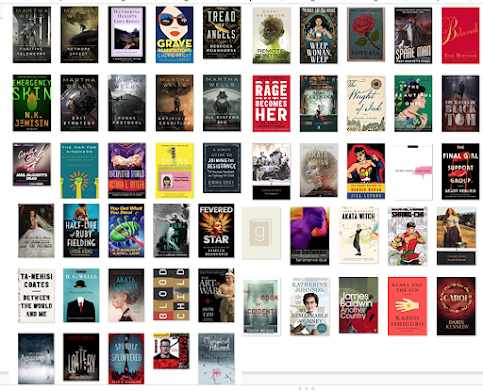 Every year, I set a goal to read 52 books: one per week. Even alongside a full-time day job and a writing life, I can generally manage that, especially if I choose a few short ones, and do a lot of reading via audiobook. I mostly read ebook and audiobook intermixed (I buy both versions and move back and forth between them), but I did read two graphic novels in paper and three books that were just ebooks (no audio). My arthritis and my vision make paper harder to handle with each year, so I'm grateful to have so many ways to access literature.
This year, I read 55 books. I expect to finish a couple more in the next day or two, but the calendar will have flipped by then, so they'll go into the count for 2023. Goodreads very helpfully tells me that I've read 14,730 pages this year, the shortest book come in at 38 pages (Emergency Skin by NK Jemisin) and the longest at 964 (Anna Karenina by Leo Tolstoy). The most-shelved book I read this year was Animal Farm by George Orwell and the least The Princess and the Peonies by Lucy Blue. My average rating was 4.1, which means I did a darn fine job finding Samantha-pleasing books this year.
If you've been reading my blog for a while, then you already know that I help run the First Monday Classics book club at my library, so some 9-11 choices (depending on whether the library is open on the First Monday) each year are books for that. Since we've been reading together for five or six years now, our definition of classic has shifted depending on who is attending the meetings and we try to find wider representation across gender and ethnicity. Generally, though, we're looking for books that are at least 20 years old and that have demonstrated staying power or influence.
This year, we revisited authors we had already read another book by: Mrs. Dalloway by Virginia Woolf (counted on 2021 reading challenge, since I finished in December 2021), Another Country by James Baldwin, Tess of the d'urbervilles by Thomas Hardy, Sense and Sensibility by Jane Austen, The Invisible Man by HG Wells, Animal Farm by George Orwell, David Copperfield by Charles Dickens, Anna Karenina by Leo Tolstoy, Beloved by Toni Morrison, and Mrs. McGinty's Dead by Agatha Christie.
I found all of them worth reading, though if you check out the reviews, you'll see that there were some frustrations as well. I probably enjoyed The Invisible Man the most--it was more comedic than I expected. Six of them were re-reads for me, and it's always interesting to see how your view of a books changes when read in different eras of your life. I liked Mrs. Dalloway better than I did as a young woman, and thought quite differently of Marianne in Sense and Sensibility.
Because I'm a bit of a book club junkie, I also have a neighborhood book club with three other women. Our picks are a lot more random, and our meetings are less regular. After we finish talking about a book, we just sit there talking about books until we agree on the next one. This year, we read: Klara and the Sun by Kazuo Ishiguro, Between the World and Me by Ta-Nehisi Coates, Better Luck Next Time by Julia Claiborne Johnson, The Personal Librarian by Marie Benedict (a did-not-finish for me), Weep, Woman, Weep by Marie DeBlassie, and Convenience Store Woman by Sayaka Murata.
As a group, we tend to like social justice nonfiction, contemporary works from other cultures, and historical fiction, so hit me up with your suggestions for what we should read next year!
Now for the hard part: favorites! 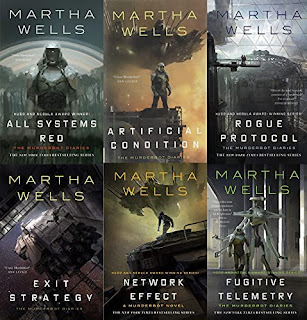 I've been hearing about Martha Wells's Murderbot Diary series for a couple of years now and I finally read them and can finally understand why they garner such praise! If you're going to read them, I recommend going in order, though each one is read-able as a stand alone. Start with All Systems Red and read all six! They are mostly novellas, so they go quickly.
So, Martha was my new find this year, but I also revisited several authors who had pleased me in past years.
Of course, there are more books on my list that I didn't talk about here. Did we read anything in common? What were some of your favorite reads this year? I'd love to hear about them in the comments!
Posted by Samantha Bryant at 6:41 PM