My March in Books

March was a helluva month at la Casa Bryant. As I write this, on the last day of March, there are five men upstairs ripping out my carpet and installing beautiful new floors. All of March and part of February has been about getting ready for this moment--basically moving out of three rooms of our home without having any other rooms to move into because we still live here.

No wonder I escaped into books as much as possible. And it was a good month for reading: 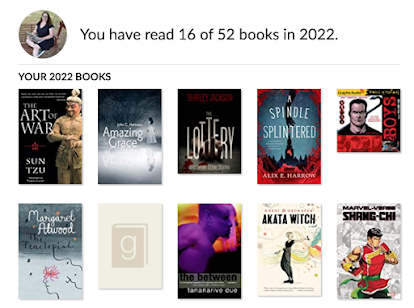 I read ten books in March.
I don't feel like rehashing the ones I didn't like, so I'll let you click over Goodreads via the links above if you want to know why I didn't like them. Let me gush a little about the good things.

It was "women in horror" month, so a perfect moment to revisit Shirley Jackson, one of my favorite authors of all time, and Tananarive Due whose work I love more and more, the more of it I read. Both of these books were well worth the read.
The Shirley Jackson collection wasn't all horror, but even when she's writing social commentary or domestic explorations with a literary bent, Shirley always sees through to the dark side of things. It had been years since I last read "The Lottery" and it was just as chilling as I remembered, but my favorite story in that collection is "Flower Garden" which captures what it's like to be an outsider in an insular community and how trapped even an insider can be by social pressure.
Tananarive Due's book, similarly, did not at first seem like it was horror. A lot of the book feels like a domestic tale of a marriage on the rocks . . . but it gets steadily weirder. Jackson and Due pair well together, with their focus on domestic settings and the horror of seemingly ordinary moments. For full disclosure, the author of Amazing Grace is my publisher. That probably influenced my choice to read it, but I assure you that, when I read work by friends and colleagues, if I don't like it, I just don't comment at all. If I'm telling you about it here, then I liked it. In fact, I loved this one. I really enjoyed the main character Lila Grace, a middle-aged Southern woman with the ability to talk to ghosts. I liked the sparks of romance between her and the new sheriff and the way that what she knew about the community mattered as much as her abilities when it came to solving the central mystery. I hope John writes more with these characters. There's definite series potential. The poor man already writes several series though, so I might have to be patient to wait for him to get back to this one.
I've read Sense and Sensibility more than once. Between reading it and watching the film with Kate

Winslet and Emma Thompson repeatedly, I was predisposed to loving this book. I'm not sure when I last read/watched it, but it was before I married my husband, so that's coming up on twenty years. In fact, I had completely forgotten that Elinor and Marianne had a younger sister (to be fair, she's really only in the beginning and end of the book).  It was just as good as I remembered, and remains my favorite of Jane Austen's work (yes, I set it higher than the acclaimed and beloved Pride and Prejudice).
So those are the books I loved this March. I also quite liked:
What did you read this month? Anything I should have on my TBR? I'd love to hear about it in the comments!

Posted by Samantha Bryant at 2:21 PM