He Was the Best Boy-o 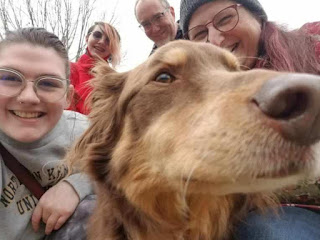 We lost our pup last week. He was almost 13, in a breed that usually lives 12-14 years, and I am so grateful he spent all his years with us. Still I wish we'd had yet more time. It's unfair that dogs live their lives so much faster than us and that the puppy I cradled in my lap became older than me, in a sense. It's one of the hardest things about giving your heart to them.
We don't know anything about his birth. He was found wandering in some local woods when he was six months old and came to us through an animal rescue agency. He was Australian shepherd, and "shrug"--as in "we don't know what else he was."
I used to say his breed was O'Neill because he was one of a kind. He had the sweetest, most expressive butterscotch eyebrows, and when he trotted ahead of me on the leash, his ears bounced like the wings of a bird struggling to take flight, and I half-expected his them to lift off his head and take off into the sky like some sort of Terry Gilliam animation.
When he was young, he was an amazing Frisbee dog, with a startling vertical leap. If he'd been human, people would have paid to watch him high jump, or slam dunk. It was like gravity had no hold over him.
Even as he got older, he was still such a stellar athlete--when I took up running (when I was 46 and he was 10 or 70, depending on how you count), he went with me, making me feel safe about running isolated trails "alone" because no one would dare approach me without permission and keeping me going even though I hate running, because I didn't want to deprive him of the joy. A perfect running coach--his joy was infectious and almost made me understand why others love running.
He took his job as protector of the family extremely seriously, even though we didn't always make it easy on him. We just wouldn't all stay in one place--which made it much harder to herd us.
Right before the pandemic hit, O'Neill did the dog-equivalent of tearing his ACL when he leapt at a squirrel, and we opted not to put him through surgery, but just to try and limit his movement so he didn't re-injure himself.  Accepting physical limitations was hard on him--he's stubborn like me.
We mostly succeeded in keeping him from hurting himself, since three of his Bryants were home with him for most of 2020 and the start of 2021. We could see that his doggy dreams had come true--all he'd ever wanted for us not to leave for work and school, but stay with him all day, where he could watch over and protect us. The best thing to come out of the pandemic has to be that my loving boy-o got to spend his last year with his family around him all the time.

Then, a couple of weeks ago, when he had another round of digestive distress (something that had been coming and going in a cycle for some months), and was clearly feeling miserable, we had an ultrasound done and found out that he had multiple tumors throughout his system, including his pancreas.

It didn't make sense to put our elderly boy-o through chemotherapy and make the end of his time with us a misery, so we took him home, knowing we were basically moving into hospice. Over those last couple of weeks, he had a lot of good days. Extra attention, including visits from big sis off to college, and his Auntie and Uncle, all the blankets and treats. My husband even found a way to play "tugger" with him and slow speed chase whenever he felt good enough to want to play.

Feeding him chicken and rice rather than dog food was something we did because he seemed to do better with it digestively, but he regarded each meal of "people food" as a massive treat. I hope he felt spoiled with love and small pleasures.

On his last day, we took him for a longer walk in the woods--something he has always loved, but hadn't been able to enjoy since his leg injury--it left him shaky and sore and ruining the rest of his day didn't seem worth it for a few minutes of joy.
But, on his last day, it didn't matter if he got tired and his legs were shaky afterwards. He was going to get a good long rest. His smile that day was a joy to behold. And he about wagged his own tail off.

We bought him his very own cheeseburger as his final treat. The vet said we could give him anything he might love, since it would not affect the ease of his passing, and we knew he'd been coveting all the hamburgers he's watched us eat all these years. His family surrounding him, and petting him, and telling him what a good boy he was, he was allowed to go to sleep and just not wake up. Time for him to rest.
I think it was the right thing to do, even if it was the hardest thing. I'll miss him forever, but I'm lucky to have had him in my life. Goodbye, Bud-bud, O-Neill-zebub, Sweetie Pup, Trouble-dog-Bryant. You really were the best boy-o. 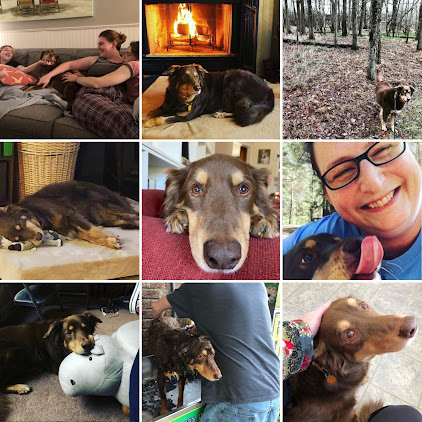