A lot of people I know don't read or watch horror, and they're surprised to find out that I do. Even more surprised when they learn that I sometimes write it.

Actual quotes from conversations along these lines:

It's not that horror doesn't scare me--it totally does!

Ask my sister about the time I threw the popcorn during a jump scare during a really terrible, not-that-scary vampire movie. Or check out the mangled pillows on the sofa after I squeeze them while I watch something scary. When I was a kid and teenager, I used to read my Stephen King, Shirley Jackson, and horror comics sitting at the top of the stairs with my back against the wall, so I could see anything that might be coming for me.

But, the things is: the story ends.

I close the book, or leave the cinema, or turn off the TV. And I am safe. I got that heart-racing excitement, but at no actual risk, other than perhaps the risk of being disappointed by a story that doesn't do it for me. Vicarious experience of the highest order.

And the stories, at least the ones I like best, are stories of resilience and hope. The heroes are not passively watching their lives go by them and wishing things would change--they take action to try to save themselves and others.

They take steps. Stupid ones sometimes. Foolhardy maybe. But life is risk and that's the heart of horror for me.

There's something comforting in active characters trying something, especially if I really connected with the characters.

It's still comforting even when they lose, falling into the zombie hoard after a heroic attempt. They died "with their boots on" so to speak, didn't they? They didn't just melt away on the sofa cushions hoping someone would save them. Those are characters worth admiring!

What about you? Do you read/watch horror? What are your favorites? 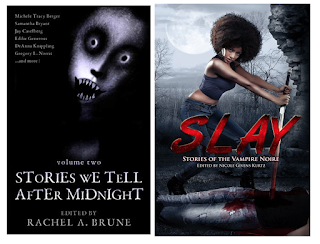 Wanna check out my horror writing? I had TWO horror stories published this month.

"The Cleaning Lady" in Stories We Tell After Midnight, Volume 2 grew from a story prompt for the Nightmare Fuel Project and dares to ask who is going to clean up this mess. Dark humor can be so much fun to write!

"His Destroyer" in Slay: Stories of the Vampire Noire revisits the Passover story from another perspective, wondering who exactly served G-d's justice on the first-born sons of Egypt during the time of the Ten Plagues. This one gave me chills to write and I hope it will do the same for you when you read it.

Posted by Samantha Bryant at 8:42 PM