The Haunting of Bly Manor: some thoughts 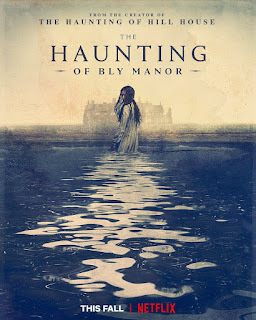 Both of these series were based off of classic works: The Haunting of Hill House by Shirley Jackson and The Turn of the Screw by Henry James, two of my favorite scary stories of all time.
But neither is a telling of the story as you might know it from the books. Instead, each is a brand new story, a kind of riff on a theme. There are echoes of the originals, but there is also completely new material and interpretations not present in the old works at all.

I've long had an interest in side and backdoor stories that come into a work I already love from another angle. Things like Jean Rhys's Wide Sargasso Sea which dared to ask who Rochester's first wife from Jane Eyre really was, or Gregory Maguire's Wicked which retold The Wizard of Oz through the eyes of the witch. I love the fresh take on a story I already love--it has a feeling of talking with other fans, and loving the original together.

These two series are not quite those, but there's a similarity. 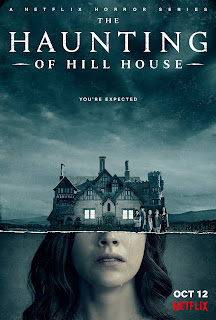 Both series changed the time frame, moving Hill House from 1950 to 1992 and Bly Manor/Turn of the Screw from the 1890s to 1987, a change which opens up story possibilities and also makes some parts more difficult.
Both stories require some serious isolation so that the events can go unobserved/uninterrupted for a while, and that kind of isolation is harder to come by in 2020. I rather thought we only went as far forward as 1992 to keep smart devices and cell phones from encroaching on the story too far.
Both stories take place in gorgeous old homes. The houses themselves are practically characters in the story--more obviously in Hill House (which is just as Shirley Jackson wrote it, in that respect), but still true in Bly Manor.

Hill House changed the premise--no longer bringing together a group of would-be ghost hunters into a known haunted house hoping for a paranormal experience as happened in the book, but instead bringing a family of house flippers into the gorgeous old mansion to try and save it and resell it. Bly Manor stuck with the original premise more closely: a nanny is hired to take care of two troubled orphaned children in an isolated mansion and paranormal shenanigans ensue.

What I loved in Bly Manor was all the new material. Henry James's story is not forthcoming about the nanny herself. We don't know her history or why she might have decided to take on a job like this one. We don't know exactly what happened to Miles and Flora's parents, other than that they died. We don't know what Miles did at boarding school that got him kicked out or why the kids' uncle is so strangely detached, not wanting even to be informed about what is going on with the children. We certainly don't know what the ghosts want, exactly.

Mike Flanagan set about answering all those questions and I LOVED the answers. They fit into the story as told by James seamlessly. Along the way, he created a whole secondary mythology of the ghost activity at Bly Manor. The imagery isn't quite as terrifying as that of Hill House (the broke neck lady is way more frightening than the blank faced ghosts, at least for this viewer), but the tension is high.
Perhaps surprisingly for horror stories, both of these series end up being primarily about grief and surviving loss. Both manage to end on bittersweet hopeful notes. Gorgeous really. Beautiful, haunting in a completely different sense of the word. I hope Flanagan finds another story to explore this way. I'll be there with my popcorn on opening night if he does.
Posted by Samantha Bryant at 10:16 AM