What I read: February Round Up

February went by in a blink, even with that extra day. Whoosh! Some of that could be because I spent the first half slowly rebuilding strength from the flu that took me down at the end of January, but I also think that the older I get the faster time moves. See Exhibit A: the grown-up-ness of my eldest daughter!

I did still fit in a few books though: 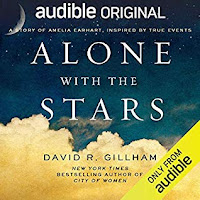 First was Alone With the Stars by David R. Gillham. I picked this one for two reasons:

1. Audible has been giving me "audible originals" as part of my membership package for months and I keep adding them to my library, but haven't actually read any of them yet.

This book is "inspired by true events" an epitaph that always jangles me a bit because it leaves me wanting to know which bits were true and which were imagined. Since I am interested in Amelia Earhart without actually having read all that much about her directly, I don't know! So, reading this also added her autobiography and poetry to my TBR.

The premise is that a teenaged girl heard Amelia Earhart's last radio calls and tried to save her. I liked the story, and the way the girl and E's stories intertwined. I wasn't fully satisfied by the ending, but then again, I'm not sure a decisive and clear ending is appropriate in a book about a woman who is famous partly because we don't know what happened to her.

All in all, quite good. Based on this experience, I'll probably try more of those audible originals I've downloaded. 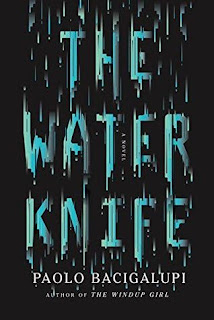 Next was The Water Knife by Paolo Bacigalupi. Bacigalupi is a writer I've heard a fair amount about--he's got some "buzz" as they say--but I hadn't read any of his work. This one is near-future environmental dystopian, focused on the fight for water rights in the American Southwest after severe droughts leave wide swaths of the country deprived.

We see the world through the eyes of three characters: the titular "water knife," a hired thug named Angel; a reporter named Lucy Monroe, and a street kid named Maria Villarosa. It's a good mix of perspectives and shows how motivations shift depending on where you're standing.

I found the story compelling, though it lingered a little too lovingly over some of the violence for my taste. I like a lighter hand and will still feel plenty horrified by atrocities that I'm not shown every detail of.

There was a minor character I *loved*--a photographer. In fact, as I read, I kept thinking that I knew this character already, that I'd read a shorter work that included him, but I can't figure out what that might have been. If any of my blog readers know what it was, please tell me! 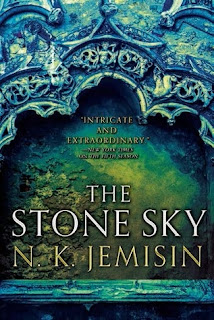 The last book I finished in February was The Stone Sky by NK Jemisin. It's another science fiction book with environmental themes. I dunno, maybe I was feeling gloomy about earth's prospects?

I've read the other two books in this series, The Fifth Season and The Obelisk Gate, and I recommend that you do the same if you're going to read these. It's a series that works best read in order as one cohesive narrative.

Jemisin was awarded The Hugo three times in a row for these three novels, and it's well deserved. The storytelling is innovative, the characters moving and fully realized, the worldbuilding amazing. All these pieces are fully integrated in a way that is rarely seen.

It was a great ending for the series, with the right notes of necessary sacrifice, hope for the future, and tying up of loose ends. Writing this a couple of weeks later, I still feel wowed.

I nearly finished two other books in February: Wide Sargasso Sea by Jean Rhys (a re-read for me), and The Testaments by Margaret Atwood. But I didn't finish them until March 1st, so I guess I'll save talking about them for my March roundup.