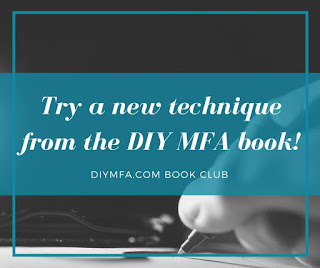 Building a writing life is all about figuring out what works for you. It's also a lifelong learning experience because change happens: your life circumstances, your writing process, even you-yourself. So, I'm always seeking new things to try. Writing life "hacks" so to speak, despite the negative connotation of "hack" when it comes to writing.  Over the years, I've found some tools and ideas that have made me more efficient and effective, and I hope to keep on finding ways to grow as my career builds.

To that end, I've been slowly reading through DIY MFA: Write with Focus, Read with Purpose, Build your Community by Gabriela Pereira, which is a good compilation of a variety of writing advice with a focus on building a process that will work for you career-long. I've also been participating in the DIYMFA book club.  They've got a very active group over on Facebook. If you're interested in exploring these themes about your own writing, I highly recommend giving them a look! 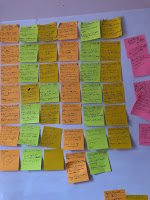 This week's prompt asked you to try a new technique and talk about how it went for you. The technique I tried was scene cards. I wrote about it previously on this blog here.

It's a form of outlining.

Now, I've never been an outliner. The story doesn't seem to come to me whole-cloth enough for that. I'm more of a quilter as I write, building pieces and then stitching them together afterwards.

But, I was really stuck on my WIP (Thursday's Children, YA, dystopian with shades of romance) last summer. So, I decided to give this a go during my yearly writer's retreat. At worst, it wouldn't work for me and I'd just be where I already was, right?

Story cards ask you to make a card for each scene in your novel, indicating the follow things:

That last bit (the purpose) turned out to be key for me. It helped me see what each scene was doing in the larger piece. The best scenes had more than one purpose: characterization plus plot reveal moment or conflict building with scene setting.

I did this is as a sort of mid-process mapping. I had already written some 30,000 words on the project. So, I mapped out what I had already written, analyzing it for these four things. I added a color coding element because the book balances three points of view (Kye'luh, Malcolm, and Jason) and I wanted to see if they were balancing, so I wrote the scene card on a different color post-it, depending on whose POV it was told in. I used a fourth color for random thoughts I didn't want to lose and left those off to the side.

I've done digital version of this before, labeling the chapters in Scrivener with different symbols and using the summary cards there to detail what the content of each chapter was, but the paper version hanging on my wall worked much better for me visually. The day after I finished my descriptive outline of what I'd already written, I made a list of "holes" I needed to fill and ideas for how the story should move forward. Here, six months later, I'm still using this chart to guide my progress and the novel is nearing its end.


I still don't think I can outline before I write. But as a way to move past my wall when I've run out of steam and need to find my direction again? This was really useful to me. As always, YMMV, because any creative endeavor is highly individual and we all work differently. But hey, if you're stuck, what can it hurt to try something?
Posted by Samantha Bryant at 9:21 AM