When my daughter was but a wee thing, and I was in recovery from a yucky medical experience, we watched the Buffy the Vampire Slayer television series together. M was an unusually fierce child, and unfazed by monster makeup (only one monster on it ever scared little her: The Queller Demon). She loved that the main character was a pretty girl who kicked serious butt. She even had a special credits dance that involved a lot of arm flailing and acrobatic leaping. Luckily for her, I do not have video of that dance, but it lives in my memory with all my most joyous visions.

We've been re-watching the series this fall, now that she's all but grown (college in on our near horizon now). In the intervening years, we've watched an episode here and there and memorized the soundtrack to the musical episode, but we've never watched it all again. It's a double nostalgia treat for me, remembering and enjoying again both the series itself and the girls' night bonding of watching it with my girl. We're in Season 2 currently, and plan to watch the whole thing again.

Stuff we love this go round: 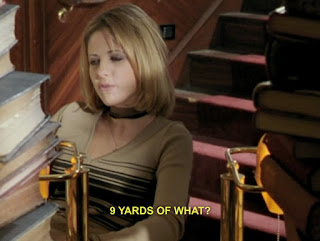 Any other Buffy fans out there? What do you love about it?