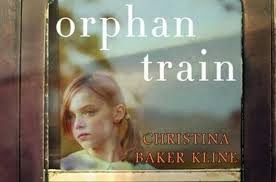 Orphan Train by Christina Baker Kline is a good book. I really enjoyed reading it.  I want to say that up front because I'm going to pick on it for some problems it has. It's not a perfect book in my opinion, but it is a book I learned from reading. I'm trying to "read like a writer" this year . .. taking time to analyze why books work or don't work for me as a reader, to figure out exactly what the writer did that I can emulate or improve on.

This book was recommended to me by a writing group friend and I read it in paperback with my neighborhood reading group. It's historical fiction, a perfect choice for me right now as I am writing a historical fiction novel myself, parts of which are set in this same time period.

Historical fiction is a tricky beast, requiring that the writer is really well informed about the history involved and uses that information to create a believable narrative, but doesn't fall into just writing a treatise about the historical moment. When it's done well, you don't even realize how much you are learning about life in that era and circumstances. It feels natural.

The historical parts of Orphan Train are really well done. Right from the beginning, when we meet Niamh/Dorothy/Vivian (the main character is known by three different names at different phases of her life--I'll call her Niamh here since that's the name her mother gave her), Kline blends information about her life and the setting with narrative that draws you to the character emotionally.

"Maisie was eighteen months old, but her weight was like a bundle of rags. Only a few weeks after she was born, Mam came down with a fever and could no longer feed her, so we made do with warm sweetened water, slow-cooked oats, milk when we could afford it. All of us were thin. Food was scarce; days went by when we had little more than rubbery potatoes in weak broth. Mam wasn't much of a cook even in the best of health, and some days she didn't bother to try. More than once, until I learned to cook, we ate potatoes raw from the bin."

This is one jam-packed paragraph, giving you the details of the kind of poverty this family was living in (Food was scarce), the nature of the mother's problems (weakened by illness, probably depressed, too), the kind of child the main character is (responsible, old beyond her years), even the implication that they are Irish immigrants (Maisie, Mam).  The details are given emotional impact by being specific to the characters in the story. It's a common enough story: children in poverty doing the best they can. But Kline makes it specific, gives you someone to root for and care about right away. Much more effective than telling us about how many people were similarly suffering.

The fact that the historical parts of the narrative were so well done might have something to do with why I didn't enjoy the contemporary setting as much. Mollie is an interesting enough character, but the two story lines felt largely unconnected, even after the teenager and the now-elderly Niamh were sharing space on a single page. The parallels between their lives were obvious: both orphaned, raised by strangers, hated by some for their ethnicity, strong-minded, intelligent.

Every time Mollie came back into the book, though, I felt like I'd been pulled out of the narrative and handed a side story with little connection. The novel actually begins with two Molly chapters, where we meet the girl and see how she got in trouble. Molly gets assigned community service for trying to steal a dog-eared copy of Jane Eyre from the library.

I get that the author needed Mollie to be in trouble, since community service is what brings her into contact with the now-elderly Niamh. I also understand that she didn't want the trouble to be too heinous, nothing that would make us as readers distrust her good heart. Still, I found it implausible that Molly would be assigned community service for the crime as described. More than likely, she would have been forced to return the book and been banned from the library.

That point aside, Molly arrives and meets her new employer. At the end of the scene, Vivian points out that they are both orphaned and says, "Now--when do you want to begin?" Presumably she's talking about the work of sorting her attic stuff, but then the next chapter flashes to 1929.

It's six more chapters before we see Molly again, thirty-two pages that cover Niamh's journey from losing her family to her first placement in a foster home. Honestly, when I read the line:


"Sometime in the second week it becomes clear to Molly that 'cleaning out the attic' means taking things out, fretting over them for a minutes, and putting them back where they were, in a slightly neater stack."


I went: Molly? Who the heck is Molly? I flipped back through the pages and then remembered the frame from the beginning. Once I remembered the frame, I tried to figure out how much of this story Molly was actually hearing versus how much was supposed to be the older woman's memory. I couldn't tell. Niamh's chapters don't feel like they are being told to someone; they feel like time travel.

That pattern continued. A couple of brief chapters of Molly, followed by a longer slice of the other woman's life. Each time, I felt jarred out of the true narrative of the historical story.

So, I wondering about the author's reasons for this way of storytelling. Was the intention to break up the horror of Niamh's life by telling us about something else for a little while? Giving us a break, like a comedy moment in the middle of a hard drama? Was it about highlighting parallels and contrasts between Niamh's and Molly's lives? Either of those sound viable, so why didn't they work for me as a reader? I don't know! Anyone have a theory?

My current theory is that I am jarred by the change in narrative voice. When Niamh is telling her own story, she always seems strong and brave and true. No matter what horrible things are happening around her, I feel her strength. When she's on the page in Molly's point of view, she's a shell of herself. Molly does see her as strong and admirable, but in the same way that she sees dead historical figures as strong and admirable, like whatever she's good for has already happened. That may be accurate to a young person's point of view, but I don't feel their personal connection in the way it seems like I should.

Maybe it's just me, though. I know other readers haven't felt that way.

So, what have I learned?

Posted by Samantha Bryant at 7:00 AM