If I could spare the time, I'd probably watch a movie a day in October, using Halloween as my excuse to cuddle up on the sofa with Sweetman and my daughters, re-watching old favorites and discovering new ones, while I stuff my face with popcorn.

Alas, I must keep us in house and home, so a movie a day is not a reasonable thing.

Still, I do tend to stuff in as many scary stories as I can in October. My daughter, age 13, is a budding horror aficionado, so I have a willing playmate when I decide to try and scare myself silly . . . and I get the bonus of sharing old favorites with my girl. So, here's what I've managed to watch so far this October:

We kicked off our spooky season watching with The Ring, 2002. It was three of us on the sofa for this one. My husband and I had both seen it, but I don't think we'd watched it together before. The teenager knew quite a bit about the film from seeing it referenced in other social media, but hadn't seen it herself.
What I remembered was the imagery--who could forget all that horrible hair? And the moment when the evil just crawls out of a television set and into the living room with its victim? When I saw it the first time, I'd hadn't seen much Asian or Asian-influenced horror, so the style was all new to me. This time, that imagery and style felt more familiar, but it was still quite spooky and I still think Naomi Watts is brilliant as the skeptic who becomes a believer and young David Dorfman and Daveigh Chase rocked the eerie child vibe in two very different but equally effective ways.
The special effects held up pretty decently on re-watch, especially since that feeling of images not quite fitting in the world they are in actually worked for the story. After the movie, we watched the extras, and I have to say that all the cut scenes belonged cut. The story is all the more frightening for NOT explaining things too thoroughly. 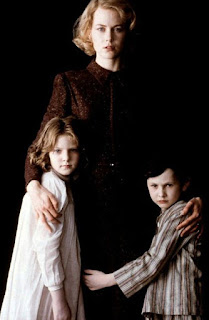 The Others, 2001, is one of those movies with a big twist, and I wondered if it would have good re-play value since I already knew the twist. (No spoilers: I won't reveal the twist here, in case you haven't yet seen this one).

I'm happy to report that even when you know what's coming, there's still excellent tension. I watched for clues throughout leading to the ending and I found them, but I also found plenty of red herrings that lead the viewer to consider several interpretations of the events they are seeing. My daughter, watching for the first time, gave me no fewer than ten theories about what was happening before we got to the big reveal (none of them correct, BTW).

Nicole Kidman's portrayal of the fragile-yet-powerful Grace Stewart is the lynchpin on which the movie rotates, but all the performances are strong. I especially loved Alakina Mann as Anne, the elder child, full of big sister bullying, boundary pushing, and a wonderful stubbornness.
And Fionnula Flanagan as Mrs. Mills stole nearly every scene she was in with her quiet, mysterious manner. Chris Eccleston broke my heart as Charles Stewart, who meeting his wife in a foggy wood tells her in a painfully haunted voice, "Sometimes I bleed." (shiver)
Wonderfully atmospheric and still riveting on rewatch for sure.
Then, my husband and I watched The Haunting, 1963, together. It's a telling of Shirley Jackson's famous book, The Haunting of Hill House . . .which is not be confused with The House on Haunted Hill, another fabulous old movie featuring Vincent Price, despite the similarity in title (maybe I'll see if I can squeeze that one in this month, too!).
It's a bit slow as a movie, maybe because it's so exceedingly faithful to the novel, including lots of voiceovers for Julie Harris as Eleanor to show us her fragile and excitable mental state. While I enjoyed the recent Haunting of Hill House television series, 2018, that wasn't a direct telling of the book, but more an update and homage to original work. This older film is for the most part extremely true to the novel--so if you love the novel like I do, you'll appreciate it for that.
The set was AMAZING, really making use of weird angles and shadows to up the spook factor at every turn. Well worth it just for some of the imagery and creative camera work. 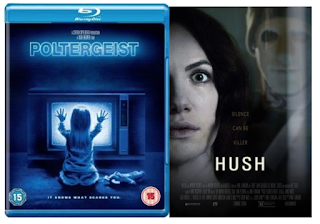 Finally, the girl and I had a mini movie marathon, watching Poltergeist, 1982, and Hush, 2016 back to back. It's been forever since I watched two movies in a row, and that, in itself, felt decadent.
My daughter didn't find Poltergeist nearly as frightening as I did when I was a child. Ah, jaded youth.
She hated the "false ending" and I had to agree with her that it wasn't as justified as it had been in The Ring, where the investigator thought she'd gotten to the bottom of the mystery and found there was more to discover. In Poltergeist, we get Carole Ann back and things are calm long enough for the family to pack up a moving truck and then Boom! We're back in the thick of things with no indication of what caused the escalation. You could argue, I suppose, that paranormal happenings don't have to follow logic, but it still made for less satisfying story-telling.
As for me, I'm like, WTF parents? They let their bloodied and traumatized son who had just been swallowed by a monster tree wander the house alone while the parents and teenaged daughter ALL THREE ran around panicking over the missing baby? No wonder he had middle child syndrome. He *really* was invisible, poor boy.
Hush caught our eye as we scanned movie choices on Netflix with its interesting premise: a deaf/mute woman is being hunted by a killer. The fact that she is deaf is both what helps her survive and what puts her more at risk. She isn't unnerved by some of the killer's attempts to rattle her because they rely on her hearing the creepy sounds, which of course, she doesn't. It was kind of neat, the way the film let the audience hear the sounds, then toggled to a muted version to give the impression of NOT hearing the same thing.
Both of us felt the film was longer than it needed to be though. It was hard to hold tension for a full movie length when all you basically had happening was a man with a crossbow circling a house and woman cowering within. Maybe it would have packed more tension in a short-film version. We also were both disappointed to never get any kind of motivation explanation for the rando killer who showed up, though we thought he was interestingly chill for a character of his sort.
I'm hoping to work in some classic monster and a couple of scary films I haven't seen yet. Are you a scary movie fan? What kind do you like? I'd love to see your suggestions in the comments!
Posted by Samantha Bryant at 6:00 AM