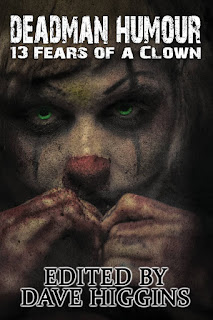 One of the best parts of a writing life is the opportunity to try new things. I love writing something unlike anything I've written before. That's part of why I enjoy writing for anthologies. It's a chance to explore new styles, themes, and subject matter.

So when the fabulous Dave Higgins put out a call for this anthology, asking for stories about what scares clowns, I was intrigued. Though I enjoy reading and watching horror, I'd only tried my hand at it a couple of times.

The resulting story, "The Gleewoman of Preservation," played off a news story that circulated in North Carolina a year or two ago.

Mysterious clowns were spotted all around the state, hanging out in the woods near playgrounds. No one seemed sure what they were up to: trying to entice children, just standing there being creepy?

Whatever it was, it had the kids at my middle school all atwitter.

So, as I do for many a story, I began with "what if?" What if the clowns were there to protect people from something else?

The anthology releases this Friday, Friday the 13th, of course, during the same month that the new It movie released. So, if you can't get enough horror with clowns, I hope you'll check it out! Myself, I can't wait to see what the other authors came up with.

Here's a teaser for you, a bit of the beginning of "The Gleewoman of Preservation."

“CREEPY CLOWN HAUNTS LOCAL PLAYGROUND.” The headline screamed across the page in twenty point gothic font. Maggie snorted. This codswallop was news? Honestly! Across the breakfast table, her husband looked up from his phone. “What?”


Maggie turned her newspaper so he could view the lurid headline. “A little over the top, don’t you think?”
Her husband reached for the paper and she let him take it, picking up her coffee and taking a sip. It was still a little too hot and burned her upper lip. She touched the sore place with her fingertip. Not too bad. It probably wouldn’t even redden that much. George always did make the coffee superheated. She joked it was because his heart was just that cold. This is what it took to defrost him.
He was back on his phone now, apparently in an active chat. She sighed, wondering why she bothered to get out of bed to have breakfast with him anymore. It wasn’t like they talked. They might as well be two strangers on the bus. Maybe it would be better when he retired too here in a couple more years. Maybe it would be worse. Time would tell.
Suddenly, George stood. “I’m going to have to go,” he said, shoving his arms through his suit-jacket sleeves. He knocked his phone onto the floor.
Maggie glanced at the clock as she moved to pick it up for him. It was still only six-thirty. “So early?”
George took a gulp from his still steaming mug, unfazed by the tongue-searing heat. “Things are already on fire over there.”
Maggie held out the phone, startled to see a group chat labeled “Gleemen.” The last message said, “EMERGENCY. Here. Now.” What was the man up to?
George pocketed the device, leaned over and gave her kiss on the cheek, lips still warm from the coffee. “Lunch today?”
Maggie nodded, pulling her bathrobe tight around her.
As soon as George was out of the house, Maggie went to the bedroom and pulled on her retirement uniform of yoga pants and a voluminous blouse, ran a comb through her gray and brown mop of hair, and grabbed her purse. What in the world were Gleemen?
Crackpot theories went through her head. She’d heard stories about women her age finding out they’d been living a lie all these years, that their husbands have secret lives they’ve known nothing about. Mistresses. Gay lovers. Shady business ventures. Dark hobbies. She had to know what George was doing. It was the surest way to shut down her hyperactive imagination…

Check out the anthology for the rest of my story, and the works of the other twelve authors. Happy Spooky Season!