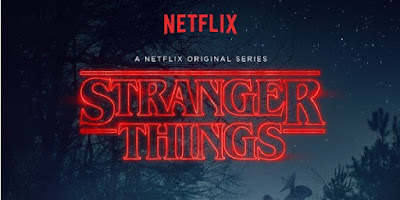 Stranger Things is a new Netflix Original series that I plowed through this week (G-d I love summer vacation!) and there's so much I love about it. Obviously, I'm the target audience. I'm 45, which means I remember the early 1980s setting very well, having spent puberty there myself. I was a huge Stephen King fan during the same time period, and felt at home as soon as I saw the fonts in the title sequence. I'm still a fan of weird tales and all things supernatural in fiction.

This show really delivers. Without getting too spoilery (I'll try to stay relatively spoiler free throughout this article), there's a central mystery involving shady and spooky stuff. There are three groups of people working on the problem, and all of them are ill-equipped in different ways to be the hero the story needs. It was beautiful how the story balanced the three groups: 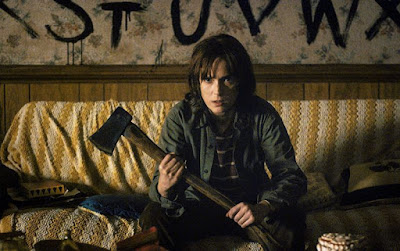 The adults: Joyce Byers (played by Winona Ryder) and Jim Hopper (played by David Harbour). They both come to believe in the supernatural explanation pretty easily, but they are both adults easily dismissed by others. Joyce has a history of "anxiety issues" and public hysteria surrounding an ugly marital history. You can see that her position in the town wasn't one of dignity and respect even before she started trying to talk about what was happening in her life. Hop has a history of grief and alcoholism and any strange behavior on his part has people wondering if he fell off the wagon. They're perfect in their unreliability. The "no one will believe us so we're on our own" vibe the story needs. 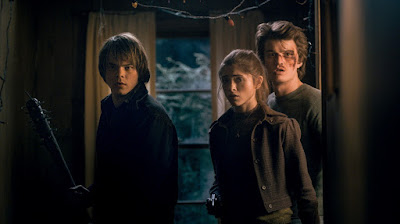 The Teenagers: A classic misunderstood loner, nice girl, and popular bro trio. But all of them are deeper and more nuanced than you would have seen in an 80s show. I was pleasantly surprised by the character arc of the "bro" in particular. They come to believe in the big bad a little more slowly, drawn into it by younger siblings (for two of them) and the disappearance of another teenager. Our loner boy, Johnathan Byers (played by Charlie Heaton) wants to protect his mother and step up into a father-protector role that he's not quite ready for. Nancy Wheeler (played by Natalia Dyer) is dismayed when ordinary teen drama about jealousy and who's cheating on who complicates her monster hunting. Steve Harrington (played by Joe Keery) transitions from a boy-who-only-wants-one-thing into someone who admits his wrongs and makes amends, someone who can be a real ally. They add the "we can't just sit here and do nothing" recklessness element. 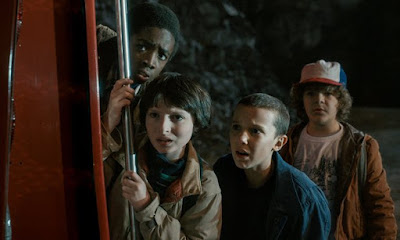 The children: Mike Wheeler (played by Finn Wolfhard), Dustin Henderson (played by Gaten Matarazzo), and Lucas Sinclair (played by Caleb McLaughlin) are a group of middle school D&D players, along with their friend Will Byers (played by Noah Schnapp). They are smart, independent, and capable kids, but also imaginative and knowledge (through D&D) about monsters. When Eleven "El" (played by Millie Bobby Brown) comes into their lives, they are the quickest to realize that there's more to her and to the central mystery of the story than it appears on the surface. In classic kid mode, they (like the adults) are sure no one will believe them, so they take matters into their own hands. The scenes where the kids are frantically riding all over town on their bikes following leads and sleuthing are straight out of things like ET and the Goonies in their nostalgia and tension.

It's only eight episodes, so you don't need too much time to see the whole season, and it ends in a beautiful place, with plenty of possibility for future story, but feeling finished enough that you won't feel frustrated or cliff-hangered. So, if you're looking for a good, tense, spooky summer show, I recommend this one!
Posted by Samantha Bryant at 6:00 AM