What I Would've Done at Jordancon

Followers of my blog already know that I go to a few conventions every year and that I *love* this stuff. I get to talk writing and books and geeky wonderful content with writers, creatives, and fans all weekend. Sometimes, there are games and drinks and delicious food. Often, there are presents to buy in the vendor room.

Next weekend, April 17-19, I was schedule to go to JordanCon in Atlanta, Georgia, named for Robert Jordan, author of the Wheel of Time series. I haven't attended JordanCon before (a little further away from home than I generally go for weekend events during the school year), so a new convention for me, This is the first big event of my author life to be cancelled for COVID-19 quarantine, and I'm feeling its loss, especially after a month of being home.

So, Friday, 17 April, I would have gotten up early, excited, happy, and a little sleepy. It's a 5.5 hour drive according to google maps, and I like to get there by lunch time when I can. I would have been happy about taking a day off of school to focus on my writer life.

I'd pick up my sister, who often goes to these events with me, and we'd hit the road, Stevia soda, nuts, and other vegan-friendly snacks in tow (she's vegan; I'm on omnivore). While I drove, we'd talk and catch up and sometimes sing along to power ballads from the 80s.

Nicole Givens Kurtz is one of the big reasons I applied to be a guest at JordanCon; she's attended this and other Atlanta events and talks so happily about her experiences there that I wanted in! So I would have been plotting to meet up with her on Friday, maybe catching lunch before the con really got rolling with her and her husband. Since she's also a publisher, she might have been busy at her table, but I could always bring take out to her if she can't get out.

Assuming I got there early enough, I'd walk around the con for a while, checking out the dealer's hall offerings and looking for con-friends to collect "long-time-no-see" hugs from, and locating all the rooms I had scheduled events in. I'd check in with my publisher, Falstaff Books, and arrange a time to come staff the table and sign books.

Since my first scheduled event was "An Hour With . . ." session, which I gather to be an open author-chat session, with opportunities to interact with readers and maybe do a reading, I'd have been looking for Venessa Giunta because we were supposed to share the time and we've never met. Based on her website, I'm betting we would have hit it off. This time slot is kind of early in the convention, so we may or may not have had much audience. If we didn't, I'd ask my sister to record me doing a reading so I could post it to my YouTube later.

At a lot of conventions I attend, I offer ten or twelve hours of programming, but I was pretty lightly scheduled for JordanCon. In fact, that was my only Friday commitment, so my sister and I would have chosen some other events to attend, gotten dinner with friends (new or old), and maybe found some music or dancing to end the night with. She's more of a night owl than me, so I might have gone to the room earlier than her, to get a little quiet and recoup time. While I love conventions, I have to allow myself proper introvert recharge time or I fall apart.

Saturday, I love to start my convention days with room service breakfast, so assuming the hotel offered it, I'd enjoy some bacon and eggs with some fruit and coffee before venturing out into the world and having to be nice to people. My sister knows, so she wouldn't talk to me until after I consumed the coffee.

I had a 10:00 a.m. panel scheduled on Character and Theme, in particular: superhero stories, character flaws, and how theme relates to internal and external plots. My fellow panelists would have been Bobby Nash, Aleron Kong, James Maxey, and Robyn Huss, so one acquaintance, one friend, and two strangers. From a promotion standpoint, I'd have been looking forward to this one. James knows me well and would "throw me a bone" if I had trouble getting in the conversation, and I was neither the least nor the most published author on the panel, which is a middle ground I'm comfortable in. 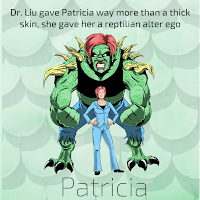 Character flaws are so much fun to work with in superhero stories. In fact, each of my menopausal superheroes has been her own worst enemy in different scenarios, acting from the gut instead of from the head and making situations worse.

No one illustrates this better than hot-headed, self-assured, and used-to-being-in charge Patricia O'Neill, the Lizard Woman of Springfield.

I'd have been looking for an opportunity to talk about the time she got Leonel shot, or Suzie kidnapped and the self-blame and guilt she dealt with afterwards.

Since my next panel wasn't until after 2:00, I'd have tried to have a writer lunch and talk writing life and life in general with interesting people before getting my head together for This Body Ain't Mine! a panel on body horror with MM Schill, Emily Lavin Leverett, and Nicole Givens Kurtz.

I'm only a dabbler in horror, having published only some five or six short stories in the genre, but I'm a fan. Emily and Nicole are friends, and I was looking forward to meeting MM Schill, especially since she has an affiliation with Pseudopod, a venue I'd love to place work in. Nicole and Emily are both passionate, articulate women I'd talk about *anything* with, so I know the conversation would have been fierce, and, given the content, I'd have shuddered at least once.

My contributions would probably have included references to movies like John Carpenter's The Thing, the 1978 Invasion of the Body Snatchers, and 2006's The Host as well as books like Mary Shelley's Frankenstein and Lauren Beukes's Broken Monsters.

Almost right after the body horror panel, I'd have hopped over to talk about The Active Protagonist with Nicole (yay! two panels in a row!), Milton J Davis and Kyoko M. I haven't yet met Mr. Davis, but I know about him through Nicole and was looking forward to meeting him in person. After checking out the website, I was excited to meet Kyoko M, too. She who writes monsters? Heck yeah! Sign me up.

The Active Protagonist doesn't have a panel description in my calendar, but I'd expect us to talk about the importance of agency for characters and some of our favorite take-action characters. I'm often bored by stories where a character just kind of sits and waits for something to happen and then reacts, so I have some strong opinions on this topic.

Passivity is a hard sell for readers, and if the passive character is a woman? I'm likely to toss that book across the room (I break more Kindles . . .just kidding). A character doesn't have to be an overpowered machine to be the person who takes action; they just have to try something besides waiting or hiding when it comes to conflict.

My panel day would have ended at that point, and I'd already be with Nicole, so if my other panelists were available, I'd propose dinner and further conversation and then look for some gaming or music fun in the evening. I probably wouldn't have found time to write yet, so I'd head back to the room kind of early and put down a couple hundred words on my WIP before sleep.

I only had one event on my Sunday calendar and it was a game! I'm a pretty avid boardgamer, and this was going to be my first time running a game at a con. Gloom is a storytelling card game with an Edward Gorey vibe. Each player receives a family of oddballs (circus freaks, eccentric misfits, etc.) and tries to kill off with the most negative points.

The game uses transparent cards that stack atop one another covering points and adding life events to the story of each character like "was badly burned" or "was diverted by drink." There are some inherently hilarious ones like "was mauled by manatees" and "pursued by poodles."

For me, the fun comes in the storytelling--elaborating on what the cards say to create a narrative for the short and unhappy lives of your characters as you gloom them to death. Mostly, I don't even care if I win.

I was really looking forward to my first time leading a game for strangers at a con like this, and hope it's something I'll be invited to do at future events.

All in all, it would've been a great weekend and I hope for the chance to be a part of JordanCon (and other cons) in 2021!

In the meantime, if you're a would-be con-goer, don't forget that your creatives rely on these events to sell their wares. If you have the means, consider still supporting the authors, game creators, clothing designers, jewelry makers, and collectors of fine geeky wares with online purchases. If we don't keep each other going now, some of our favorites won't be able to keep doing what you love!
Posted by Samantha Bryant at 6:00 AM