If you've been reading these posts, you already know my husband got us a subscription to Disney Plus, so my daughter (age 12) and I have taken on a project of watching all the Disney animated features in order. I'm writing about the movies and our reactions here on the blog.

Since the United States was kind of busy in the 1940s, thanks to WWII, Disney produced mostly collections of short animations during this period. Even though the release dates are largely post-war, the artists must have working on these pieces during some tumultuous times, and the Disney studio did a lot of government propaganda work, leaving less time to develop popular features.

The compilation/anthology movies don't appeal to me as much as the more extended movies that tell a single story. My daughter doesn't mind though. She's a bigger animation fan in general, though, seeking out animators on YouTube in her spare time and drawing still images in the various styles she sees there. So, she enjoyed these more than I did. 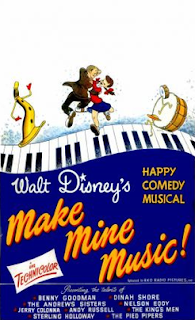 The next one on our list was Make Mine Music (1946), and I was disappointed to find that it wasn't on Disney Plus. I know I've seen it because when I read the description on wikipedia, I remembered Casey at the Bat, Peter and the Wolf, Johnny Fedora and Alice Bluebonnet, and that one with the singing whale. I'll check back for it in the future. Maybe there's a distribution rights problem or something.

On the other hand, I wasn't at all surprised that Song of the South (1946) wasn't there. That one already felt weird in terms of race depictions in the 1970s when I was a little kid. It would probably be even stranger now.

I told my daughter about it, and we both wished we could have watched it for the animation study, to see if the integration of live action and animation had gotten any better after The Three Cabelleros in 1944. I remember thinking it was pretty amazing at the time, but then I wasn't the animation connoisseur she is.

Having learned about Uncle Remus stories, though, my daughter had an a-ha moment about the reference her dad and I sometimes make to being thrown in the Briar Patch, so hey--educational moment :-)

My daughter and I both enjoyed Dinah Shore's reading and singing of Bongo, but were more than a little perplexed at the whole "Bears Say I Love You With a Slap" thing. My daughter's reaction was pretty much: Wait? What? Still, it was a fairly charming story and we enjoyed it, even if we didn't find anything especially memorable about it. We both enjoyed seeing Jiminy Cricket again. He's a charmer, that little bug. 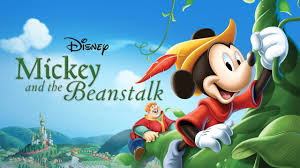 Edgar Bergen introduced Mickey with his dummies Charlie McCarthy and Mortimer Snerd. Now I've never found Bergen's schtick funny, but I tried to hold my tongue and let my girl decide what she thought uninfluenced by me. I guess she's my kiddo, after all, because she also wished they would just hush up with the creepy dolls and staged conversations and get back to the story.

Mickey and the Beanstalk was a charming telling and does a good job integrating the normal personalities of Mickey, Donald, and Goofy into the familiar fairy tale. The giant was such a goofball that he wasn't scary at all. We were happy to see him again at the end, pulling the roof off Edgar Bergen's house and then stomping off into the city to put on the Brown Derby restaurant as a hat.

Next we made it to 1948 and Melody Time, which was a string of music-centered stories: Once Upon a Wintertime, Bumble Boogie, The Legend of Johnny Appleseed, Little Toot, Trees, Blame it on the Samba, and Pecos Bill. I remembered Johnny Appleseed and Little Toot from childhood, and was happy to recognize The Andrews Sisters and Roy Rogers among the narrators.

My daughter knew Johnny Appleseed, too--having had a babysitter in her preschool years who showed that cartoon alongside lots of Veggie Tales to the children when she needed a break. And I'm proud to say that she knows who The Andrews Sisters were, too. She's a fan of an electro-swing rendition of Mr. Sandman, which sent her down a historical music rabbit hole, so she's now probably the only twelve-year-fan of a musical group her great-grandmother used to love.

Among the other stories, we were both mostly just annoyed by Once Upon a Wintertime and couldn't figure out why in the world Jenny and Joe were all cuddly at the end when their disastrous ice skating date should have taught them both that they are ill suited for one another. The music didn't really go with the animation either. It looked slapstick and sounded melodramatically romantic.

Bumble Boogie was fun visually and would have been at home in Fantasia, but it's good that it's short.

The Legend of Johnny Appleseed was way more overtly Christian than I remembered, but still managed to be pretty charming, even though both of us don't usually enjoy art that proselytizes too much. Johnny was just so earnest and grateful for his blessings that it's hard not to like him.

Little Toot definitely benefitted from the Andrews Sisters' talents, because the story is a bit of a muddle. My daughter that Little Toot's parents were the ones were needed a talking to, maybe something about age-appropriate expectations and child supervision. 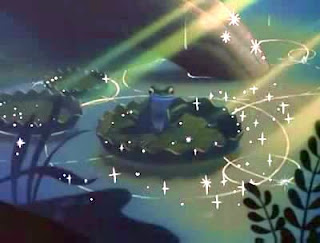 Trees was really pretty to look at onscreen. According to wikipedia, "To preserve the look of the original story sketches, layout artist Ken O'Connor came up with the idea of using frosted cels and render the pastel images right onto the cel. Before being photographed each cel was laminated in clear lacquer to protect the pastel. The result was a look that had never been seen in animation before." It truly was striking visually! We oohed and ahed over that one, but again we were glad it was short because the poem wasn't very interesting and there wasn't really a narrative hook.

Blame it on the Samba was a repeat of The Three Caballeros in that Donald Duck and José Carioca are panting over beautiful human women again. Eye-rolling 1940s sexism. Dullest bit in the film. Who knew Donald was such a horn-dog?

Pecos Bill was the silliest piece. A tall tale story you might hear alongside something about Paul Bunyan or John Henry, it told the story of a cowboy who had been raised by coyotes, wrestled cyclones, and fell in love with a cowgirl named Slue Foot Sue.

We giggled quite a bit during this section, but its silly-ness really brought out how all over the map the tones were in this collection. It was very much a kitchen-sink production, probably having something for everyone since we threw everything in willy-nilly.

Next should have been So Dear to My Heart, 1948, but it too was unavailable on Disney +.  So onward we went to The Adventures of Ichabod and Mr. Toad, 1949. Neither of us was sure why these two stories were paired for release. There's really nothing to connect them, though both are fun in their own way. I remembered both stories with some fondness from childhood. My daughter had never seen either one. 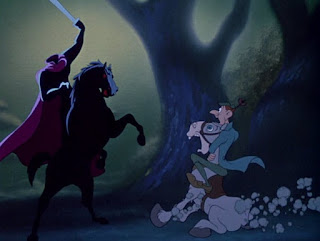 Mr. Toad is about, well, Mr. Toad. He's a madcap frog with an enthusiasm for speed and adventure that gets him into trouble. The portrayal of Toad's mania with the hypno-spinning-wheel eyes was entertaining, as was the whole frog running around the countryside dressed as a country gentleman from the turn of the century.

It was a light and entertaining story and we both enjoyed it, but thought it rather forgettable. (The introduction by Basil Rathbone delighted me, but unfortunately my daughter doesn't know who he is, so we'll have to try some old school Sherlock Holmes on her soon.)

Ichabod was a delight. Bing Crosby was perfect and we were both delighted by the portrayal of Ichabod (already a familiar character to both of us) as socially graceful despite his gangly appearance. The scene where he's dancing with Katrina at the party and stuffing himself with pie without ever missing a step and Brom is trying and failing to switch partners so he can squire Katrina around the dance floor? Priceless. So many moving parts in that scene and all so deftly handled. Brilliant.

Talking afterwards we wondered if Katrina's ploy worked and made Brom work harder to win her heart or not. We hoped that Ichabod found a warm hearth and good food in another town. He was a man of simple enough wants after all.

We're both glad to be done with the anthology pieces now. Check back soon to see what we think of Disney in the 1950s. I'm anxious to see how Cinderella holds up!
Posted by Samantha Bryant at 6:00 AM